You can call them Pisarei e fons or bread gnocchi with porcini mushroom sauce.

I have in my eyes the image of my grandmother Maria with her sweater closed with a pin and the “scualeina” (apron) with flowers as she moves quickly in the kitchen.

I have in my ears her words: “Dai, Bartèn! Ajutam a prepará i pisarei ”. (Come on, Robertino, help me prepare the Pisarei). It was an event, it meant there was an important family reunion coming soon.

I have in my nostrils the scent of the sauce, cooked in the terracotta casserole already from early in the morning. With a piece of celery, half a carrot, and a small, white onion cut in half, the peeled tomatoes gurgled over the fire, at minimum over a flame diffuser.

I have the memory of the consistency of the dough as the ingredients blend on the wooden plank. Neither too hard nor too soft; always rough and never uniform.

It all started days before with the choice of the ingredients; the peasant woman who brought eggs from the countryside; the bread, only and exclusively white, dried, grated and sieved; Ligurian oil with the golden label was delivered at home; Parmigiano Reggiano and butter bought in Mrs. Jole’s cheese shop; white flour and black-eyed beans bought from Bollani, the shop where you could find everything from “Baratti” candies to salted cod, from sugar in bulk to light bulbs.

Then, finally, the day of preparation arrived: the grandfather recovered the wooden plank in the cellar, the grandmother spread a tablecloth on the bed that served as a drying room for a day. My aunt and an octogenarian friend of my grandmother’s arrived. Yes, because the preparation of fresh pasta or pisarei was a social event: we got together, and gossip started about practically everything and everyone. Television, the Internet, and “social media” did not exist, but ………..

I still wore shorts, I was 10-11 years old, and I lived with my father’s parents: lucky !!!! The passion for cooking was born there, for sure. I was only assigned to make “bisce” (the snakes) and bring the dumplings already made over Grandparents “big bed”. Meanwhile, I listened, looked, touched, and learned.

Traditionally, the “pisarei” are served with a bean sauce but in the various superior hotels, where I was lucky enough to work, I had to “enrich” the sauce with more refined products or products considered as such. The most common is the king of mushrooms: the boletus! Where there was the possibility – fresh, otherwise that of Borgotaro!

Here is the recipe with some small changes to the traditional recipe. Enjoy!

In ancient times, bread was bathed in hot water. This is a poor dish!! Nothing was thrown away, not even old bread! The result was a hard and unpleasant dumpling that filled the stomach. Over time the quantities of flour and breadcrumbs have changed, milk has been added and water has been removed. My grandmother also added a potato to make the pisarei softer.

Heat the milk until almost boiling. Pour the bread on the table and wet it with the milk. Mix with a spoon. Add the mashed potato and the other ingredients except for the egg. Start kneading: the dough must not be too hard but not too soft either: it must have a slightly firmer consistency than potato gnocchi. If you realize that the dough is too hard, add an egg or other milk. If it’s too soft ….. start over again! Joke!!! Add some more flour, of course!

From the elastic and soft dough, cut off pieces that you will roll with the palms of your hands to give them the shape of a small snake, like a breadstick. Then, cut small pieces, the size of a bean, which, crushed with your thumb, will acquire the hollow shape of gnocchetti.

There are legends of the “old days”, about some mothers-in-law who checked the thumbs of their daughters-in-law to understand if they would be good wives for their sons!! What mothers-in-law control today? I do not know!

The pisarei are ready; you can distribute them on a tray covered with a clean and dry kitchen cloth. Or leave them on the wooden board if you use one. You don’t need to cover them, even if they dry out a little it won’t be a problem.

You can keep the pisarei in the refrigerator for a day. Alternatively, you can freeze the dumplings made but still raw for a maximum of 2 months. Spread the pisarei on a tray, leave them in the freezer for a couple of hours and then pass them in bags in the most convenient quantity for future use. You can cook them directly, frozen!

By their very nature, pisarei need plenty of sauce after cooking; sauce that once drew on garden products or pig slaughtering residues (lard, sausage, pork rinds). In the mountains, it was served in a soup version.

Today we are “richer” and have access to different, even more, exotic ingredients. In my wandering through various countries and continents, I had to adjust the recipe according to religious and cultural beliefs as well as linguistic and geographical differences.

Here a variant of the classic sauce with beans that normally accompany the “pisarei”:

Which Mushrooms to Buy for Pisarei?

You can make mushroom gravy with fresh, frozen, or dried mushrooms. Or a mixture of all of these 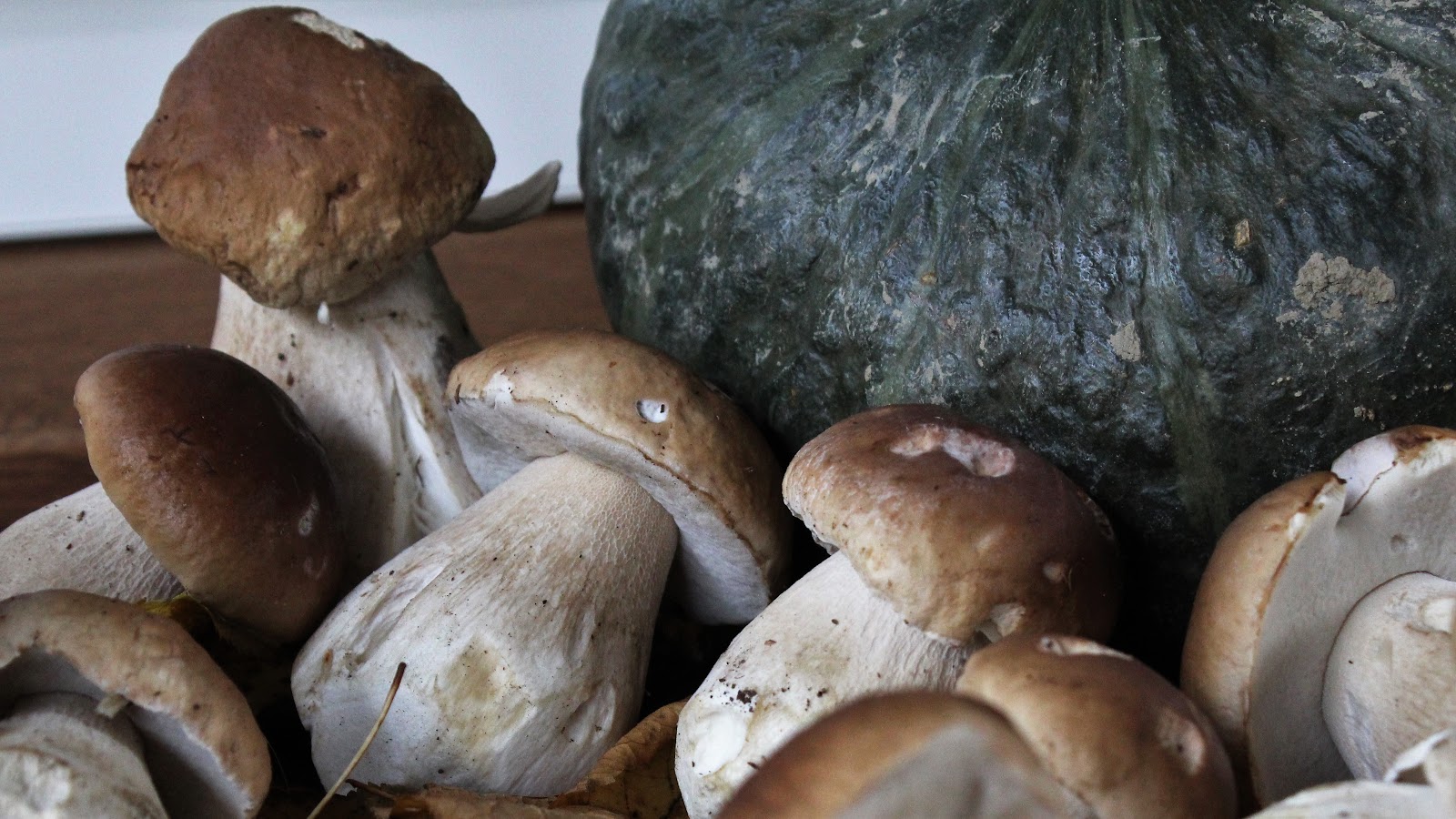 1) If you use fresh mushrooms you can buy porcini … or even mixed mushrooms (if you really cannot do without them. The important thing is to NEVER wash them underwater but clean them only with a clean cloth or scrape off the earth with a small knife).

2) If you use frozen mushrooms, cook them directly from frozen in a pan with oil and garlic and over very high heat.

3) If you use dried mushrooms you will have to soak them in warm water for about ten minutes. I use the soaking water.

How to Prepare the Mushrooms Sauce?

Put the extra virgin olive oil in a pot together with the garlic and shallot cut in half. Over low heat cooks until the shallot becomes shiny. Add the white wine and let it evaporate. In good company, you drink the wine! To the health of the sauce!

Add the mushrooms (both frozen, dry soaked, and fresh and cut into small pieces) and cook over high heat for a few minutes (if they are frozen, cook until all the water is dry).

Add the tomato sauce, salt, lower the heat, add the peeled and halved carrot, the celery stick. Cover with a lid.

Cook the mushroom sauce over low heat for about 25 minutes, then uncover, raise the heat, and add the soaking water from the dried mushrooms. Continue cooking for another 20/30 minutes so that the mushroom sauce shrinks a little.

Season with salt if necessary. Add the butter, stir, and turn off the heat.

How to Store Mushrooms Pisarei?

The mushroom sauce can be kept for two days in the fridge, you can freeze it.

Cook the pisarei in boiling salted water. When these come to the surface, lower the heat, serve yourself a glass of Gutturnio and let the gnocchi cook for a couple of minutes more. Do not be afraid, they don’t overcook!!!

After that, drain them making sure that they remain moist, and season them abundantly in a bowl with the sauce obtained. Chopped rosemary and plenty of Parmigiano Reggiano to finish.

This website uses cookies to improve your experience while you navigate through the website. Out of these cookies, the cookies that are categorized as necessary are stored on your browser as they are essential for the working of basic functionalities of the website. We also use third-party cookies that help us analyze and understand how you use this website. These cookies will be stored in your browser only with your consent. You also have the option to opt-out of these cookies. But opting out of some of these cookies may have an effect on your browsing experience.
Necessary Always Enabled
Necessary cookies are absolutely essential for the website to function properly. This category only includes cookies that ensures basic functionalities and security features of the website. These cookies do not store any personal information.
Non-necessary
Any cookies that may not be particularly necessary for the website to function and is used specifically to collect user personal data via analytics, ads, other embedded contents are termed as non-necessary cookies. It is mandatory to procure user consent prior to running these cookies on your website.
SAVE & ACCEPT