Etymology. The word gnocchi is thought to come from nocca, which means knuckles, or from the Lombardic word knohha, which means knot (such as wood knot). All words that imply the small, tight, rounded shape of gnocchi that we know today.

The most famous potato gnocchi that is known and loved worldwide date back more likely to the seventeenth century—well after Spanish explorers brought potatoes from South America and introduced them to Italian kitchens.

Before potatoes, gnocchi existed but with different ingredients such as squash and breadcrumbs. Gnocchi was the perfect peasant food, both filling and inexpensive.

There are many regions that claim the origins of gnocchi. While they are generally associated with northern Italy, the truth is that these dumplings are found all over the peninsula and in many diverse forms, made with a variety of base ingredients depending on where they come from: flour, cornmeal, semolina, bread, chestnut flour, ricotta, or vegetables—from pumpkin to spinach to the classic potato. 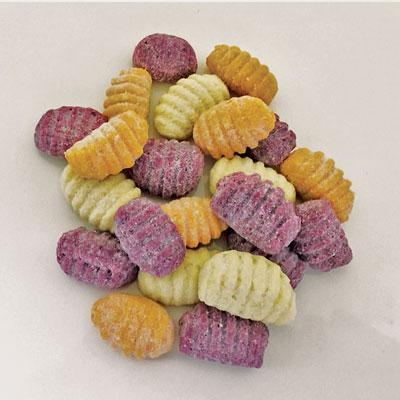 Potato gnocchi are apparently easy to make, but they hide a series of small pitfalls that can determine the outcome of a bad dish.

What are the secrets to make potato gnocchi, which do not lose shape when cooked, that maintain a smooth texture, soft and palatable, and that has the slight taste of potato and not the annoying flavor of flour?

When it comes to potato gnocchi, the best choice would be using a dry and starchy potato variety: their puree will be less liquid and therefore will require less amount of flour. Minor amounts of flour also mean a better result; this way you will taste the authentic flavor of potatoes. So, if you can, use the Russet or the Yukon Gold potato. Desirèe, King Edward, another choice. 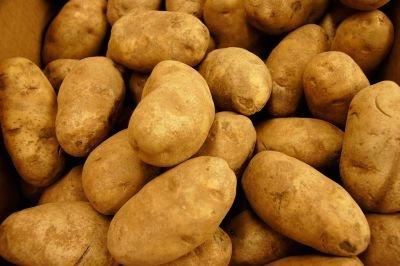 Other forms of gnocchi have been around since the Renaissance (and likely much earlier) In the fifteenth century, Lombardy, gnocchi made of bread, milk, and ground almonds were called zanzarelli. Bartolomeo Scappi (was a famous Italian Renaissance chef) in his cookbook, (Opera dell’arte del cucinare 1570) has a recipe for “gnocchi” made from a dough of flour and breadcrumbs mixed with water and pushed through the holes of a cheese grater. Later egg, flour, and water were introduced to the recipe, which became known as malfatti.

The word means “badly made” and is still the name that Tuscans apply to their spinach and ricotta dumplings, gnudi.

In the nineteenth century, Pellegrino Artusi, the “grandfather” of Italian cuisine, published a recipe for potato gnocchi prepared in the same way that we use today, complete with some interesting story (a woman whose gnocchi disappeared in the pot she was boiling them in—because she hadn’t used enough flour to hold them together). He first shapes his gnocchi into little finger-sized pieces and then rolls them against the back of a cheese grater for texture. That texture, whether created by rolling gnocchi with the tines of a fork or with a special wooden implement, help give the smooth dumplings little nooks and crannies where the sauce can hide and guarantee full flavor with every bite.

Every region in Italy, especially in the north, has its own gnocchi variation and its own specific sauce or serving style. In Piedmont or Lombardy, you might find potato gnocchi tossed in a simple dressing of butter and Parmesan, or in a creamy, cheesy sauce passed under a grill to brown the top before serving. In Verona, potato gnocchi is traditionally served in a tomato sauce— it is a dish associated with Carnival.

In Venice, gnocchi is also known as “macaroni.” Made from a base of flour, milk, and eggs cooked and shaped into little discs, they are baked in the oven with butter and cheese. It is a similar preparation to Lazio’s famous gnocchi alla romana: round, flat discs of cooked and cooled semolina. Still further south, on the coast of Sorrento, a Sunday lunch typically includes potato gnocchi baked in the oven with a bright tomato sauce, fresh mozzarella, and basil: gnocchi alla sorrentina.

The gnocchi family is numerous, to summarize Artusi, and when you look at the extended family, you see that in many ways, these recipes are the predecessors of pasta. But even more than pasta, this humble and beloved preparation has largely remained a homemade one, keeping Italy’s traditions safe in the kitchen.

In order to maintain for long-time gnocchi, you have to freeze them. Here is how to do it: put potato gnocchi, well-spaced, on floured trays (wood, plastic, or cardboard). Place the trays with gnocchi into the freezer. Wait for 2/3 hours then transfer them in food plastic bags and put them back into the freezer.

Do not put freshly made still soft gnocchi in plastic bags, otherwise, they will stick to each other! Cook the gnocchi when they are still frozen in boiling water (as indicated above), directly from the freezer to the pot. This way they will retain the softness and texture of freshly made potato gnocchi.

This website uses cookies to improve your experience while you navigate through the website. Out of these cookies, the cookies that are categorized as necessary are stored on your browser as they are essential for the working of basic functionalities of the website. We also use third-party cookies that help us analyze and understand how you use this website. These cookies will be stored in your browser only with your consent. You also have the option to opt-out of these cookies. But opting out of some of these cookies may have an effect on your browsing experience.
Necessary Always Enabled
Necessary cookies are absolutely essential for the website to function properly. This category only includes cookies that ensures basic functionalities and security features of the website. These cookies do not store any personal information.
Non-necessary
Any cookies that may not be particularly necessary for the website to function and is used specifically to collect user personal data via analytics, ads, other embedded contents are termed as non-necessary cookies. It is mandatory to procure user consent prior to running these cookies on your website.
SAVE & ACCEPT